recent and upcoming exhibits and screenings - 2016 to present

August. "Off the Wall": Videos selected by the Arts and Literature Laboratory. "SP #23" an official selection.   Madison, WI.

Jan - Sept.  "An Irresisitible Urge to Create: The Monroe Family Collection of Outsider Art".  I have a painting in this exhibit.  Boca Raton Museum of Art. Boca Raton, Florida.

November '21 - May '22.  "An Irresistable Urge to Create: The Monroe Family Collection of Outsider Art." I have a painting in this exhibit.  Tampa Museum of Art.  Tampa, FL.

July - October.  "An Irresistable Urge to Create: The Monroe Family Collection of Outsider Art." I have a painting in this exhibit.  Mennello Museum of Art. Orlando, FL 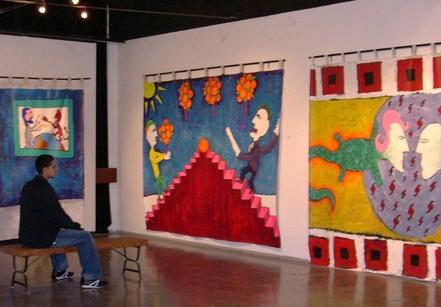 Knickerbocker's paintings may engage the viewer with childlike playfulness, but it is anything but child's play.

...the exhibit continues in the darker confines that are illuminated by Carl Knickerbocker's raw and garish palettes.

The oversized acrylic on canvas paintings of Carl Knickerbocker are as large and powerful as the societal issues they tackle.

The cultural significance of the power watch has even snuck into the art world: 'The Romance of Conspicuous Consumption' currently hangs in the front window of the Magidson Fine Art Gallery on Madison Avenue.

It was a leap into the fast lane when Chuluota based artist Carl Knickerbocker recently shared Madison Avenue gallery space with Pop Art icon Roy Lichtenstein. 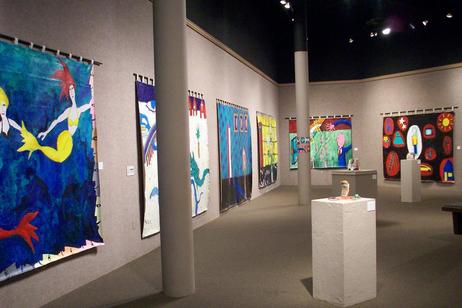 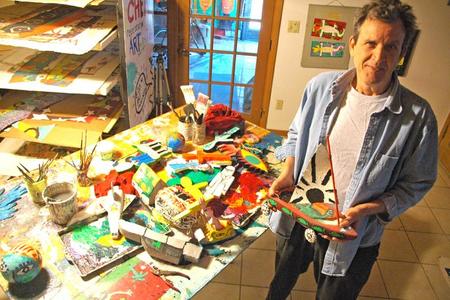 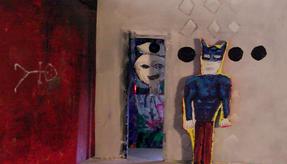 There is a refreshing directness to his imposing work as it welcomes us into a primitive world of juxtaposed situations and environments. This work is at the extreme other end of the scale from classical and academic renderings. In this regard, the exhibit challenges the museum visitor in evaluating the ever-changing realm of visual art.

Knickerbocker's art provides us with a paradox that is simultaneously entertaining and enlightening, thus transforming the prosaic into poetry.